Home JAMB JAMB PAST QUESTIONS AND ANSWERS ON GEOGRAPHY 2010 (TEXT)

JAMB PAST QUESTIONS AND ANSWERS ON GEOGRAPHY 2010 (TEXT) 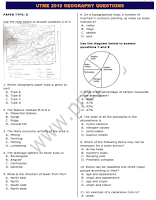 Use the map below to answer question 2 to 5. 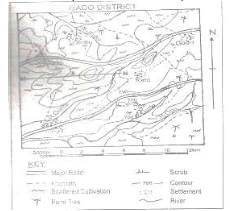 Use the diagram below to answer questions 7 and 8.

Use the diagram below to answer questions 13 and 14.

18. When there is a remarkable difference between the data taken from the dry bulb and the wet bulb thermometer, it implies that?
A.      there is little water vapour in the air
B.      there is great cloudiness
C.      the atmosphere is stable
D.      evaporation is no longer taking place

33. The rise of Japan as an industrial nation owes much to?
A.      her large population
B.      the relentless efforts of her government
C.      the abundance of energy
D.      the cordial relationship with her neighbours

34. In developing countries, the most inhibiting factor for industrialization is?
A.      multicultural economy
B.      monocultural economy
C.      capitalism
D.      diversified economy

38. Which of the following best explains the reason for the decrease in the practice of bush fallowing in Nigeria?
A.      Mechanized agricultural outputs
B.      The availability of agricultural inputs
C.      Rapid growth of population
D.      Lack of interest in crop production

43. Which of the following is a major problem affecting the development of the Southern coast-lands of Nigeria?
A.      poor soil fertility
B.      Oil pollution and spillage
C.      Ocean tides
D.      Hilly terrain of the area

Use the diagram below to answer questions 48 and 49