-->
Home JAMB JAMB PAST QUESTIONS AND ANSWERS ON CHEMISTRY 2011

JAMB PAST QUESTIONS AND ANSWERS ON CHEMISTRY 2011

1. Which question Paper Type of Chemistry is given to you?
A. Type A
B. Type B
C. Type C
D. Type D

2. What is the concentration of a solution containing 2g of NaOH in 100cm3 of solution?

9.  The molecular lattice of iodine is held together by __.
A. dative bond
B.  metallic bond
C.  hydrogen bond
D.  van der Waal's forces 12. The importance of sodium aluminate (III) in the treatment of water is to __.
A. cause coagulation
B.  neutralize acidity
C.  prevent goitre and tooth decay
D.  kill germs

16. Which of the following noble gases is commonly found in the atmosphere?
A.  Xenon
B.  Neon
C.  Helium
D.   Argon

21. An effect of thermal pollution on water bodies is that the __.
A. volume of water reduces
B. volume of chemical waste increase
C.  level of oxides of nitrogen increase
D.   level of oxygen reduces

24. The function of zinc electrode in a galvanic cell is that it __.
A.  undergoes reduction
B.  serves as the positive electrode
C.  production electrons
D.  uses up electrons 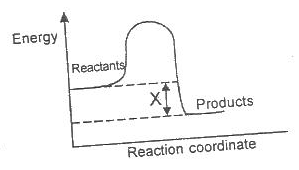 27. In the diagram above, X is the
A.  enthalpy
B.  enthalpy change
C.  activation energy
D.  activated complex 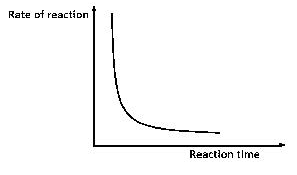 28.   The diagram above best illustrates the effect of decrease in __.
A. concentration
B.  temperature
C.  surface area
D.  pressure

30.          Given that M is the mass of a substance deposited during electrolysis and Q is the quantity of electricity consumed, then Faraday's first law can be written as
[Electrochemical equivalent]

31. The impurities formed during the laboratory preparation of chlorine gas are removed by
A. H2O
B. NH3
C. H2SO4
D.  HCl

32. The effect of the presence of impurities such as carbon and sulphur on iron is that they __.
A. give it high tensile strength
B.  make it malleable and ductile
C.  increase its melting point
D.  lower its melting point

34. The bleaching action of chlorine gas is effective due to the presence of __.
A.  hydrogen chloride
B.  water
C.   air
D.  oxygen

36. The property of concentrated H2SO4 that makes it suitable for preparing HNO3 is its __.
A. boiling point
B. density
C. oxidizing properties
D. dehydrating properties

37. Bronze is preferred to copper in the making of medals because it __.
A.  is stronger
B.  can withstand low temperature
C.  is lighter
D.  has low tensile strength

40.  The ability of carbon to form long chains is referred to as  __.
A. alkylation
B.  acylation
C.  catenation
D.  carbonation

44. The reaction above represented by the equation above is useful in the production of  __.

47.   Which of the following is a primary amine?

48. Two organic compounds K and L were treated with a few drops of Fehling's solutions respectively. K formed a brick-red precipitate while L, remains unaffected. The compound K is an __.
A.  alkanol
B.  alkane
C.  alkanal
D.  alkanone

The reaction above is best described as __.
A.  esterification
B.  condensation
C.  saponification
D.  neutralization