Home JAMB JAMB PAST QUESTIONS AND ANSWERS ON GEOGRAPHY 2012 (TEXT)

JAMB PAST QUESTIONS AND ANSWERS ON GEOGRAPHY 2012 (TEXT) 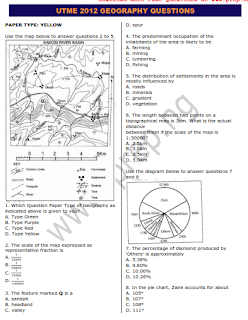 1. Which Question Paper Type of Geography as indicated above is given to you?
A. Type Green
B. Type Purple
C. Type Red
D. Type Yellow

Use the map below to answer question 2 to 5.

2. The scale of the map expressed as representative fraction is

4. The predominant occupation of the inhabitants of the area is likely to be ___.
A. farming
B. mining
C. lumbering
D. fishing

5. The distribution of settlements in the area is mostly influenced by ___.
A. roads
B. minerals
C. gradient
D. vegetation

Use the diagram below to answer questions 7 and 8 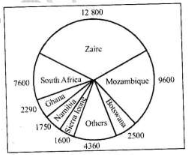 9. Chain survey is most convenient for measurements on ___.
A. rocky environment
B. plains
C. embankments
D. irregular slopes

11. The rock type formed through the deposition and compression of elastic particle is ___.
A. anthracite
B. sandstone
C. limestone
D. mudstone

12. Which of the following rock types is formed through the ejection of magma onto the surface of the earth?
A. Lignite
B. Granite
C. Slate
D. Basalt

Use the diagram below to answer question 14 and 15.

17. The phenomenon of change in direction of wave fronts as they approach the sea shore is known as ___.
A. wave refraction
B. tidal wave movement
C. wave drifting
D. retro-gradation

18. The storm which occurs over the China Sea between latitudes 80 and 150 N and S of the equator is a ___.
A. tropical thunderstorm
B. tornado
C. typhoon
D. temperature thunderstorm.

20. Plants that are highly tolerant of drought and can survive in dry habitats are referred to as ___.
A. hydrophytes
B. mesophytes
C. tropophytes
D. xerophytes

21. An important characteristic of the B-horizon in tropical ferruginous soils is the ___.
A. eluviation of oxides
B. concentration of organic matter
C. accumulation of oxides
D. predominance of parents material

23. The most significant economic use of ocean water is for ___.
A. drinking
B. bathing
C. transportation
D. recreation

24. The major terrestrial ecosystems are often referred to as ___.
A. biomes
B. biomass
C. grasslands
D. boreal forests

27. Which of the following factors discourages population concentration in an area?
A. Grasslands
B. Frozen soils
C. Mineral deposits
D. Alluvial plains

28. The ratio of registered births to the population of women of child -bearing age is known as the
A. fertility rate
B. mortality rate
C. growth rate
D. morbidity rate

29. The number of deaths, births, immigrants and emigrants over a specified time interval determines
the population
A. density
B. change
C. growth
D. structure

30. Which of the following is mainly associated with tourism?
A. Rural settlement
B. Commercial settlement
C. Holiday resort
D. Confluence town

31. The merging of two or more extensive urban areas results in a ___.
A. city
B. megalopolis
C. conurbation
D. metropolis

32. Fertile plains are usually characterized by a pattern of settlement referred to as.
A. nucleated and concentric
B. nucleated and elongated
C. dispersed
D. nodal

34. The lack of access to food in some parts of the world emanates from ___.
A. low development of natural resources
B. educational inequality
C. poor transportation system
D. economic inequality

38. Petroleum is extracted in Nigeria by ___.
A. drilling
B. refining
C. mining
D. dredging

39. In Nigeria, the major products that are taken to the markets from the south to the north are ___.
A. beef, onions, groundnuts and grains
B. plantains, garri, kolanuts and palm oil
C. oranges, vegetables and beef
D. potatoes, rice and onions

44. The largest rift valley system in the world is in ___.
A. West Africa
B. North Africa
C. East Africa
D. South Africa

45. The Sahel region of Africa is prone to ___.
A. drought
B. flooding
C. earthquakes
D. volcanoes

46. The Algeria’s oil fields are located in ___.
A. Hassi Messaoud
B. Touggourt
C. Marsa el Brega
D. Gulf of Sirte

47. The major factors that account for the pattern of population distribution in West Africa are ___.
A. transportation and communication
B. physical and economic
C. historical and social
D. social and political

48. The highest mountain in Africa is found in ___.
A. Cameroun
B. Ethiopia
C. Kenya
D. Rwanda

49. The two major plantation crops in West and East Africa respectively are ___.
A. cocoa and coffee
B. cotton and coffee
C. cocoa and groundnut
D. rubber and cotton

50. The most densely populated river Delta in Africa is the ___.
A. Niger
B. Chari-Lagone
C. Nile
D. Zambezi.