Home JAMB JAMB PAST QUESTIONS AND ANSWERS ON GEOGRAPHY 2014

JAMB PAST QUESTIONS AND ANSWERS ON GEOGRAPHY 2014 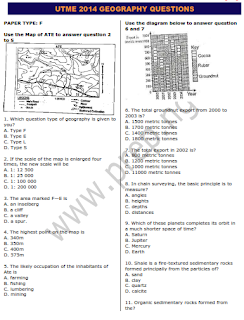 Use the map of ATE to answer question 2 to 5. 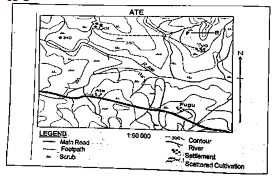 5. The likely occupation of the inhabitants of Ate is __.
A. farming
B. fishing
C. lumbering
D. mining

Use the diagram below to answer question 6 and 7. 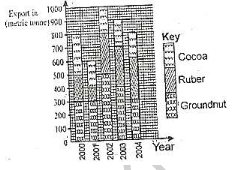 8. In chain surveying, the basic principle is to measure?
A. angles
B. heights
C. depths
D. distances

9. Which of these planets completes its orbit in a much shorter space of time?
A. Saturn
B. Jupiter
C. Mercury
D. Earth

10. Shale is a fire-textured sedimentary rocks formed principally from the particles of?
A. sand
B. clay
C. quartz
D. calcite

11. Organic sedimentary rocks formed from the?
A. solution of subsects
B. result of pressure from underlying rocks
C. remain of living organisms
D. vegetative matters

12. The intrusive landform produced when magma is cooled within the earth surface is?
A. cinder
B. batholith
C. composite
D. geyser

13. Which of the following is an agent of denudation?
A. Insolation
B. Wind
C. Energy
D. Gravity

14. Which of the following rocks is characterized by layer formation and strata?
A. Metamorphic
B. Volcanic
C. Sedimentary
D. Igneous

15. Which of the following seas has the highest salinity?
A. Caspian
B. Mediterranean Sea
C. Baltic Sea
D. Red Sea

16. Some lakes are seasonal due to their location in?
A. hot deserts
B. humid areas
C. high altitudes
D. cool temperate margin

17. Which of the following is an element of weather?
A. Thunder
B. Breeze
C. Latitude
D. Precipitation

18. A line drawn on a map to show places of equal temperature is known as?
A. isobar
B. isotherm
C. isohyet
D. isoline

19. The term used to describe the vegetation type of the Amazon Basin is?
A. pampas
B. coniferous
C. selvas
D. vale

20. The major factors which determines the rate of infiltration of water into the sub-soils is?
A. temperature
B. rainfall intensity
C. nature of rocks
D. nature of slope

21. The level of development of the soil profile is determined by?
A. climate
B. time
C. parent material
D. organic matter

23. Which of the following is a component of a biotic community?
A. Rocks
B. Water
C. Gases
D. Animals

24. The type of coal that burns with great heat and very little smoke is?
A. anthracite
B. lignite
C. steam coal
D. peat

25. The most serious environment effect posed by hazardous wastes is __.
A. contamination of groundwater
B. destruction of habitat
C. air pollution
D. increase use for land to landfills

26. Which of the following indices is a measure of development?
A. Total population
B. Population density
C. Life density
D. Types of building

27. The growth rate of population is determined by?
A. improved agriculture
B. number of deaths per 1000
C. birth and death rates
D. technological know-how

29. Which of the following is a favourable condition for settlement site?
A. Dense natural vegetation
B. Marshy fadama area
C. Adequate water supply
D. Mountainous ratio

30. Which of the following countries is perennial irrigation extensively practised?
A. India
B. Bangladesh
C. The Sudan
D. Holland

32. Dairy farming is an example of intensive farming commonly practised in?
A. Brazil
B. Denmark
C. Spain
D. Niger

33. As a country develops a smaller percentage of the workforce tend to be employed in?
A. mining
B. agriculture
C. manufacturing
D. services

35. High annual rainfall of at least 1520 mm, well distributed throughout the year with the heaviest during growing season is most suitable for the production of?
A. wheat
B. maize
C. barley
D. rice

37. An agricultural practice that allows a wide range of crops to be grown without fallowing is?
A. shifting cultivation
B. crop rotation
C. mixed cropping
D. intensive cultivation

38. Arable farming and animal husbandry widely practised in Britain and many parts of Europe is referred to as?
A. mixed farming
B. crop farming
C. orchard farming
D. pastoral farming

Use the map below to answer question 39 and 40. 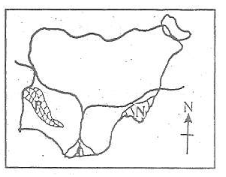 41. The type of vegetation found on the Mambila Plateau is?
A. guinea savanna
B. Sudan savanna
C. high forest
D. montane

42. Which of the following best explains the reason for the decrease in the practice of bush fallowing in Nigeria?
A. Mechanized farming
B. The availability of agricultural inputs
C. Rapid growth of population
D. Lack of interest in crop production

44. The reason for seasonal migration of nomadic herdsmen is?
A. for the search of water and good grazing
B. because of the inability of government to provide shelter
C. to search for a safe environment
D. due to high rainfall in some regions

45. The main industry associated with the Ruhr Valley region is?
A. iron and steel
B. oil refining
C. food manufacturing
D. ship building

46. Which of the following factors influenced the growth of the Ruhr Valley?
A. Soil fertility
B. Good climate
C. Agriculture
D. Industrialization

47. The largest producer of timber in Africa is?
A. Kenya
B. Senegal
C. Cote'D Ivoire
D. South Africa

48. The relatively low level of rail transport development in tropical Africa has?
A. encouraged the development of airports
B. reduced government expenditure on transportation
C. placed undue pressure on roads
D. increased the rate of migration from the sea

49. The high population density in the Nile Valley is as a result of?
A. industrial growth in the valley
B. multipurpose dams to support the growing population
C. multiple transportation development
D. shaduf irrigation