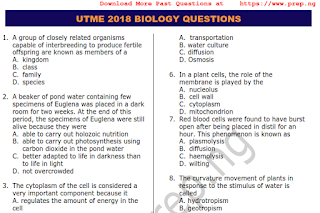 1.  A group of closely related organisms capable of interbreeding to produce fertile offspring are known as members of a ___.
A. kingdom
B. class
C. family
D. species

2. A beaker of pond water containing few specimens of Euglena was placed in a dark room for two weeks. At the end of this period, the specimens of Euglena were still alive because they were
A. able to carry out holozoic nutrition
B. able to carry out photosynthesis using carbon dioxide in the pond water
C. better adapted to life in darkness than to life in light
D. not overcrowded

3. The cytoplasm of the cell is considered a very important component because it __.
A. regulates the amount of energy in the cell
B. suspends all cell organelles
C. is the outermost part of the cell
D. is solely responsible for cell division

Use the diagram below to answer questions 4 to 6 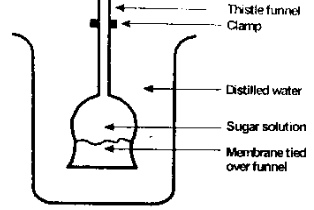 4. After an hour, the level of water in the thistle funnel will __.
A. rise
B. fall
C. remain the same
D. double

5. The experiment is used to demonstrate the process of __.
A. transportation
B. water culture
C. diffusion
D. Osmosis

6. In a plant cells, the role of the membrane is played by the __.
A. nucleolus
B. cell wall
C. cytoplasm
D. mitochondrion

7. Red blood cells were found to have burst open after being placed in distil for an hour. This phenomenon is known as __.
A. plasmolysis
B. diffusion
C. haemolysis
D. wilting

8. The curvature movement of plants in response to the stimulus of water is called __.
A. hydrotropism
B. geotropism
C. Phototropism
D. thigmotropism

11. Which of the following structures is not a skeletal material?
A. Chitin
B. Cartilage
C. Bone
D. Muscle

12. The reason why the flow of blood through the capillaries is very slow is ___.
A. because the walls of capillaries are very thin
B. to avoid high — blood pressure
C. to ensure that the individual does not get dizzy
D. to allow adequate time for exchange of materials

14. Which of the following features is not a characteristic of arteries?
A. possess values at internals throughout their length.
B. have thick muscular and elastic walls
C. carry blood away from the heart
D. transport oxygenated blood with the exception of the pulmonary artery.

The graph below shows the results of a laboratory investigation which measured the body temperatures of a lizard and a bird under changing artificial conditions.
Use to answer questions 15 and 16. 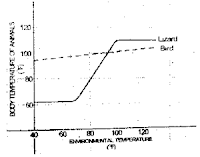 16. What physiological term can be used to describe the regulation of the body temperature of the lizard?
A. Homeostasis
B. Homeothermy
C. Poikilothermy
D. Osmoregulation

17. The reason why hospitals use saline solutions as drip instead of water is __.

A. because salt is a preservative
B. to prevent contamination of the body
C. to maintain the composition of body fluids
D. to increase the number of blood cells

18. The part of the ear which contains nerve cells sensitive to sound vibrations is the __.
A. cochlea
B. ampulla
C. tympanum
D. malleus

20.   A seed of a flowering plant can best be described as __.
A. radicle and plumule
B. the developed ovule
C. the embryo and endosperm
D. developed ovary

21.   Which of the following processes removes carbon from the atmosphere?
A. Putrefaction
B. Photosynthesis
C. volcanic eruption
D. Burning fuels

22.   Which of the following cycles involves the process of precipitation and transpiration?
A. Water cycles
B. Carbon cycle
C. Nitrogen cycle
D. oxygen cycle

23.   What is the critical limiting factor for plants below the photic zone in an aquatic ecosystem?
A. Availability of nutrients
B. Availability of water
C. intensity of light
D. Carbon dioxide concentration

24. Which of the following instruments is used to estimate the number of plants in a habitat?
A. Pooter
B. Pitfall trap
C. Quadrat
D. Sweep net

25.   Which of the following statements is true about sandy soil? It __.
A. has limited air space
B. is light and easy to dig
C. drains slowly
D. is heavy and poorly aerated

26.   Which of the following organisms is a primary consumer?
A. Dog
B. Sheep
C. Grass
D. Fungus

Study the diagram of a food chain shown below and use it to answer question 27 and 28.
P→Q→R→S→T

27.   The organism designated P in the food chain above is normally sustained by energy from
A. sunlight
B. carbohydrates
C. green plants
D. mineral salts

28.   Which of the following statements best describes the organism designated R? It
A. feeds on S.
B. is a primary consumer.
C. is a producer as well as a consumer
D. is a secondary consumer

29.   Which of the following diseases is not hereditary?
A. Albinism
B. Scabies
C. Haemophilia
D. Colour blindness

30.   The immediate product of meiosis in flowering plants is the __.
A. sporophyte
B. gametophyte
C. zygote
D. pollen grains

31.   DNA in eukaryotic cells is contained in the __.
A. central vacuole
B. nucleus
C. lysosome
D. golgi body

32.   A man who is heterozygous for the disease haemophilia marries a woman who is double recessive for haemophilia. What percentage of their offspring would have the disease?
A. 0%
B. 25%
C. 50%
D. 75%

34. An animal which is active during the day is known as a __.
A. nocturnal animal
B. diurnal animal
C. terrestrial animal
D. homoatomic animal

35. Evidence of evolution include the following except
A. fossil records
B. comparative anatomy
C. mutation of genes
D. geographical distribution of organisms

Use the diagram below to answer questions 36 and 37. 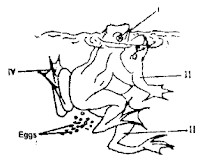 36. The diagram shows that the organisms are __.
A. hermaphrodite
B. viviparous
C. oviparous
D. ovoviparous

37. The breeding posture illustrated in the diagram is known as __.
A. mating
B. amplexus
C. courtship display
D. reproductive swimming

38. An accurate identification of a rapist can be carried out by it conducting a
A. RNA analysis
B. DNA analysis
C. blood group test
D. behavioural traits test

39. A boy who is fond of swimming in a pond finds himself passing urine with traces of blood. He is likely to have contracted
A. schistosomiasis
B. onchocerciasis
C. poliomyelitis
D. salmonellosis