Home JAMB JAMB PAST QUESTIONS AND ANSWERS ON CHEMISTRY 2017 (TEXT)

JAMB PAST QUESTIONS AND ANSWERS ON CHEMISTRY 2017 (TEXT) 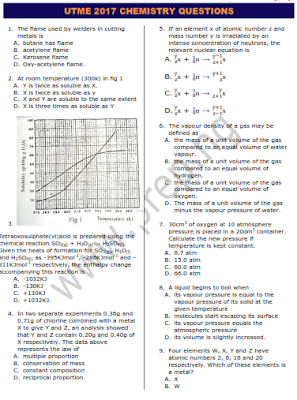 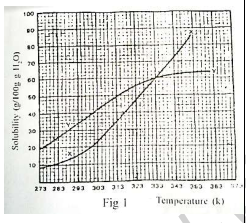 4.   In two separate experiments 0.36g and 0.71g of chlorine combined with a metal X to give Y and Z, an analysis showed that Y and Z contain 0.20g and 0.40g of X respectively. The data above represents the law of __.
A.   multiple proportion
B.   conservation of mass
C.   constant composition
D.   reciprocal proportion

5.   If an element x of atomic number z and mass number y is irradiated by an intense concentration of neutrons, the relevant nuclear equation is __.

10. When cathode rays are deflected unto the electrode of an electrometer, the instrument becomes __.
A.   negatively charged
B.   positively charged
C.   neutral
D.   bipolar

11.When large hydrocarbon molecules are heated at high temperature in the presence of a catalyst to give smaller molecules, the process is known as __.
A.   disintegration
B.   polymerization
C.   cracking
D.   degradation

14.In the electrolysis of dilute sulphuric acid using platinum electrodes, the products obtained at the anode and cathode are:

3R(s) + S(g) ∆H is negative. Which of the following will increase the yield of R?
A.   using a larger closed vessel?
B.   increasing the temperature.
C.   Removing some S
D.   Adding a positive catalyst

20.The coloured nature of transition metal ions are associated with their partially filled __.
A.   f-orbital
B.   S-orbital
C.   P-orbital
D.   d-orbital

22.The products formed on hydrolysis of 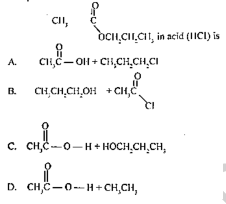 26. In the manufacture of iron in the blast furnace, iron (III) oxide is mixed with coke and limestone, and different reactions occur in the process. Which of the following, statements are true with respect to these reactions?
A.   The coke is a powerful reducing agent and easily converts the iron oxide to iron
B.   The calcium carbonate reacts with SiO2, an earthly impurity in the ore, to form calcium silicate
C.   The coke will react with the iron produced to form steel
D.   The calcium carbonate decomposes to give calcium oxide, which then forms calcium silicate with the earthly impurity

The electrons of two atoms Y and Z are arranged in shells as shown above. The bond formed between the atoms of Y and Z is __.
A.   ionic
B.   covalent
C.   dative
D.   metallic

32.The number of atoms in one mole of a substance is equal to __.
A.   the atomic number
B.   the Avogadro number
C.   the gas constant
D.   the number of electrons.

33.Which of the following terms indicates the number of bonds that can be formed by an atom?
A.   Oxidation number
B.   Valence
C.   Atomic number
D.   Electro-negativity

34.The structural formula of ethanoic acid is __.

35.Environmental pollution is worsened by the release from automobile exhausts of __.
A.   water vapour
B.   steam
C.   smoke
D.   heavy metals

39.Which of the following substances has the lowest vapour density?
A.   Ethanoic acid
B.   Propanol
C.   Dichloromethane
D.   Ethanal